The Lesson of the Trillion-Dollar Coins 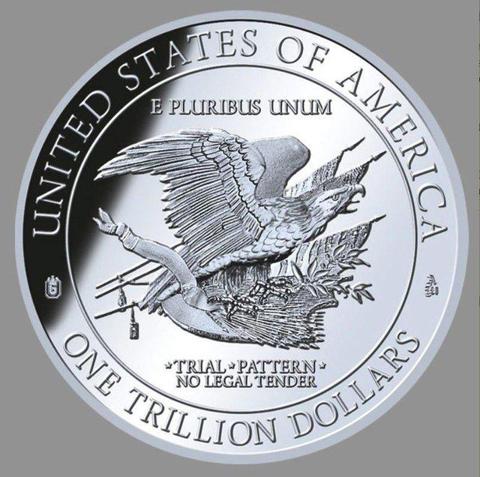 The spread of coronavirus has hit our political discourse with the force of a battering ram. It was only weeks ago that Joe Biden explained his opposition to Medicare for All with the customary “How are we going to pay for it?” objection. Now, on the heels of another $2.3 trillion in asset purchase programs announced by the Fed (bringing the total to around $6 trillion), Congress has finalized its fourth emergency response package, this time with a price tag of $484 billion (bringing their total to nearly $2.7 trillion in spending). Yet the reflexive budgetary objections of normal times are conspicuously absent. Where, exactly, is all this money coming from?

The “plumbing” of our financial system is so intimidatingly convoluted that we should hardly feel embarrassed if these glimpses of its machinations leave us feeling a bit mystified. It is against this backdrop that we can appreciate the great virtue of Rashida Tlaib’s recent proposal to pay for crisis response measures by minting two trillion dollar platinum coins. The idea may seem bizarre, or even comic, at first glance. However, it performs an extremely important service in this critical moment: it demonstrates with unique clarity the fact that Congress has the power to fund its spending simply by creating money. The platinum coins proposal is essentially this great lesson of the recent opening of the public spigot, storming the public square in a neon jumpsuit, jumping up and down, and waving its arms frantically for attention.

The recent emergency response measures are hardly the first time we’ve seen Congress drop its habitual fretting about where all the money will come from. Of course, we saw it for the Trump tax cuts, as well as for his military budgets. But we also saw it for the bailouts during the 2008 financial crisis. And the lesson is dawning on the public consciousness. Modern Monetary Theory, the school of economic thought that has been shouting the lesson from rooftops for over two decades, has elbowed its way into the public discourse in recent years, earning both airtime and bitter denunciations from upholders of the status quo. But these past weeks, amidst such a dramatic opening of the public spigot, even CNBC commentators took to the air to declare “we are all MMTers now.” However, for those who do not follow the technical debates of the financial press, the point still has yet to register. And this is where the platinum coins come in. The proposal calls on the Treasury Mint to use its legal authority to mint two one-trillion-dollar platinum coins so Congress can instruct the Fed to purchase them at face value, and the Treasury can “pay for” emergency response spending out of the account balance it receives in exchange for the two coins. If the proposal seems to make a mockery of our sense of the forbidding mystique of money, that is exactly the point.

The great twentieth century economist John Kenneth Galbraith once wrote that the process of money creation is “so simple, that the mind is repelled.” While the plumbing of the financial system is convoluted, the essential truth is simple: money is created by typing numbers into a computer screen (or engraving “$1 trillion” into a coin). And though discourses regarding the independence of the Federal Reserve and the role of the bond market can obscure it, the fact is that Congress possesses this power itself and can wield it freely. It effectively does so even without the platinum coins, though in a far more opaque and convoluted way. But the coins make the reality and depths of this power impossible to ignore or deny. One of the great silver linings that could emerge from this crisis is that this critical and underappreciated truth might at last register in the consciousness of the wider public. If it does, this will empower us to demand that this capacity be fully deployed on behalf of the public interest, and the awesome power of money creation might finally be held accountable to democracy.

The platinum coins discredit the longstanding fiction that our representatives routinely invoke to escape responsibility for better serving us: that we can’t possibly afford it. This is not to say that there are no constraints on federal spending, only that they are significantly different from the ones typically assumed. The platinum coins scream at us as a democracy to know our freedom, but we must also be mindful of the responsibility that comes with it. This responsibility is twofold and calls on us to strive for balance between the two. First, we must be careful that in spending we do not cause an inflation problem (though money creation is not inflationary in itself, under certain conditions it can eventually become inflationary). And second, we must ensure that in wielding this awesome power, we do not needlessly neglect public priorities we now recognize we have the capacity to attend to.

When we emerge from this crisis, we must remember the lesson of the platinum coins and the communities most impacted by neglecting public priorities. Historically, the black community has been both hit hardest by national crises and routinely neglected by or even excluded from crisis response measures. The New Deal, for all its achievements, was profoundly marred by such racism. More recently, both the response to the 2008 crisis, and the recovery package in its aftermath were entirely inadequate to redress the disproportionate damage the crisis inflicted upon the black community. There is no doubt that in the aftermath of this crisis, as our representatives cobble together measures to aid in the country’s economic recovery, such negligence and structural discrimination, will once again rear its head with protestations of the unaffordable cost of taking the appropriate measures. And when that happens, we must remember the platinum coins.

With jobless claims now pouring in, in record numbers, we are confronted with the precariousness of our economic security in a way we normally are not. Of course, in good times and bad, the unemployment rate for black Americans is reliably double that of whites. While the short-term crisis response may call for immediate cash relief with no strings attached, in the medium and long term, people will need jobs and the opportunity to participate meaningfully in the economic life that they offer. In the wake of a crisis, that puts millions of people out of work, is exactly when the need for a Federal Job Guarantee is most urgent. But also, having been confronted with the economic insecurity we all face, the importance of establishing and upholding the right to a decent paying job should be all the more vivid to us now. This program is not only the unfinished work of the Civil Rights Movement, it is also a key pillar of the Green New Deal resolution and boasts the support of 78% of the public. When they ask how we will pay for it, we must remember the platinum coins. Then, armed with their lesson, we must demand that the public spigot be put to the service of the public. No longer can we tolerate the ongoing farce that this public spigot does not exist, after we have seen it so spectacularly and routinely turned on. This is our money, and we must demand that it be created and spent on our behalf.