The Bloodless Conquest: The Gentrification of the Black Community 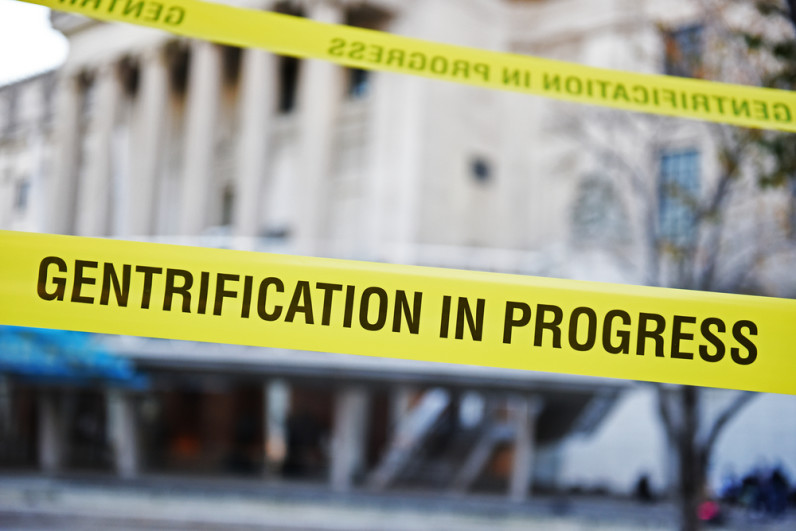 In urban centers across the country, few policy issues are as widely discussed as the encroachment of gentrification and the intensification of the associated housing affordability crisis. Merriam Webster defines gentrification as the process of repairing and rebuilding homes and businesses in a deteriorating area (such as an urban neighborhood) accompanied by an influx of middle-class or affluent people and that often results in the displacement of earlier, usually poorer residents. Of course, this issue has hit black communities especially hard, with former black cultural centers eroding into shadows of their former selves. The communities that once inhabited these neighborhoods are increasingly decimated by historic levels of displacement. But why now? And how did this happen? Why do we seem to have had no say in the trajectory of our communities? Most of all, what can be done to stop the bleeding? The exodus of African Americans from the communities we have long inhabited represents a draining of the lifeblood of neighborhoods we, in many cases, can still call our own. We must achieve the clarity and conviction to defend our communities before it is too late. A deeper knowledge and understanding of our context offers robust support for just such clarity and conviction.

The rise of America’s urban centers is the story of America’s industrialization. Our cities were largely built to house the working classes, which migrated to cities in search of jobs in factories during America’s industrial heyday. America’s black population enters this story during the Great Migration in the early twentieth century, when African Americans began to leave the south in search of work in the industrial north. This phenomenon accelerated in World War II as the war effort brought about the emergence of jobs in factories and shipyards, this time also including the west coast. The predominantly black makeup of America’s inner cities in the second half of the twentieth century was solidified by the rise of white flight in the post-war years. This was aided by generous government subsidies provided to exclusively white veterans returning from the war. With the automobile now on the scene, America witnessed the growth of suburbia. Redlining, a practice by which blacks were excluded from home loans for houses in white neighborhoods, ensured America’s cities retained their deeply segregated character.

From here, America began its descent into de-industrialization. The vaunted American middle class of the post-war period, often now remembered with great nostalgia, was largely an achievement of America’s labor unions. When American manufacturers discovered they could escape the relatively robust bargaining power of the American worker by moving their factories overseas, the already inadequate economic pillars of urban black communities began to crumble. In the wake of white flight, funding for maintenance of public housing was cut. For the urban black community, the descent into de-industrialization also meant the descent into the war on drugs and mass incarceration. By the time America’s financial sector embarked upon a spree of industrial-scale mortgage fraud in the first decade of the new millenium, the economic fragility of the black community made the community especially susceptible to predatory lending targeting. Black grandmothers who may have long paid off their mortgages were told by slick-talking mortgage peddlers that they could “use their houses like piggy banks.” This meant borrowing against equity in their homes, on the theory that the loans could be repaid upon the eventual sale of the property. When the financial crisis hit, these borrowers often found themselves “underwater,” owing more on their mortgages than their homes were worth. Even many who were not underwater found their homes foreclosed upon as foreclosure fraud added to the already devastating foreclosure crisis. The destruction of black wealth was unprecedented. Its ravages claimed the homes of many of my parishioners.

If the election of our first black president promised relief in such trying times, that promise proved to be challenging. While few will contest the necessity of the bailouts, the result was particualry insidious. Financial institutions, which perpetrated fraud on an industrial scale, were sheltered from accountability and the relative crumbs of federal money appropriated by Congress to provide relief to under-water homeowners largely never made it to its intended recipients. Obama explained his administration’s decision not to disperse these funds saying he feared a right-wing populist backlash. While underwater homeowners did not receive relief, the Tea Party was born nonetheless, and was hardly appeased by President Obama’s “fiscal prudence.”

As a result of the bailouts, the federal government found itself with a significant volume of mortgages on its books, many of which corresponded to underwater houses. It could have retained public ownership of underwater properties and allowed the tenants to remain in their homes. It could have written down the underwater mortgages to a level that would have allowed the tenants to stay in their homes while they paid off the remaining balance of their mortgages. Instead, it sold off the mortgages to private investors, even providing guarantees to the buyers in case the mortgages defaulted. The private investors, of course, systematically foreclosed on underwater homeowners. Banks stuck with underwater mortgages on their balance sheets sold them off to private investors as well. Private investment firms like Blackrock are now among the world’s largest landlords, having acquired their properties on the cheap in a moment of distress. The result was effectively indistinguishable from a bloodless conquest. What was once owned by the black community was now largely owned by faceless private investment firms, poised to reap immense profits as historically black neighborhoods gave way to gentrification. Real estate developers had been assiduously advancing the project of gentrifying urban centers for years, if not decades in some cases. With black homeownership greatly reduced, the transformation of our urban centers could accelerate all the more rapidly, as the new landlords promptly raised rents beyond what former tenants could afford.

There is one character in this narrative which is conspicuously absent: democracy. With the onset of the Reagan Revolution, America learned to view legitimacy as rooted in the ownership of private property. We deserve a say over what we own, which we presumably bought with money we earned, and deserve to have control over. But when it comes to a say in our democracy, we are not so sure. How can we deserve something we don’t feel we have earned? Shouldn’t we scoff at such entitlement? Wouldn’t we have to raise taxes in order to actually do anything? Who wants to pay more taxes? Who wants to demand the indignity of a handout? Ultimately, we were cleverly shamed into shunning our democratic power in favor of the “dignity” of self-reliance. Only later did we learn that the dignity of self-reliance was the “dignity” of losing our homes while the banks were bailed out, and of being exiled from our communities while developers and private investment firms took over neighborhoods we once called home. The trite slogan “united we stand, divided we fall” has never been so vividly vindicated. But the deeper lesson is that we earn our say in our democracy by doing the work entailed in holding our democracy accountable for serving the interests of our communities.

There is another character in this narrative which has been much more inconspicuously absent: money. Where does it come from? How many of us realize that because our federal government has the power to create money, we don’t actually need to tax in order to spend? How many of us notice that this immense power of money creation is strangely erased from our sense of the power of our democracy? Yet it reared its head when the crisis struck and the authorities rushed to patch up our collapsing financial system in 2008. Why was this superpower of our federal government put at the disposal of our financial system, but not at the disposal of the most vulnerable casualties of the crisis? And what about the banks? How many of us are aware that the reason they acquired so many of our homes in the aftermath of the crisis is not because they lent out money entrusted to them by depositors, but because our government endows them with the ability to create the money we borrow by simply typing numbers into a computer screen? When we are blind to the role of money and specifically its creation, we are blind to our own public power and how it is being used on behalf of elites rather than the public.

While we have learned to see power as flowing from private property, it is public power that upholds the rights of private property. As a democracy, we must learn to see public power as our own. Public power could guarantee quality housing to all with the stroke of a pen, and pay for the purchase or construction of that housing with numbers typed into a computer screen. And this is to say nothing of the range of effective regulatory fixes that could be applied to the housing affordability crisis with the exercise of our democratic power. If we are to preserve and take control of the destiny of our communities, we must deliver upon the great promise of our democracy. To do this, we must recognize the power that we have and the dignity of exercising it.